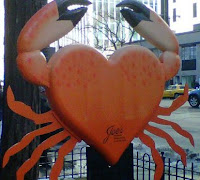 Anytime my husband and I discuss a friend’s health issues – or sudden death – I can count on him to say, “we’re at that age”. It’s meant to explain away whatever’s happening, as if it were the only possible reason.
Of course, to some extent that’s true. One of the downsides of growing older is that we lose a lot of people we love. We expect our parents, grandparents, aunts and uncles to die; after all, they’re a generation older than we are.
But when people our own age – not to mention those younger – die, it’s a double loss. Because when our friends die, we lose a little of ourselves, too.
I’ve spent the past couple weeks dealing with loss and possible loss. One friend died suddenly. Another insists he’s fine, though his track record for revealing personal information is sketchy.
The one that’s been particularly tough for me is someone I’ve known and loved since I was in college. The story of our relationship is rather complicated, but most of that time we’ve been close, even while living far apart.
He had a health scare. Actually, he was extraordinarily lucky. About to be wheeled into the operating room for minor surgery, the anesthesiologist stopped everything. There was something wrong with David’s heart and it would be dangerous to proceed.
After a trip to the cardiologist, there was more sobering news. Not only did he need surgery, but he’d already had several silent heart attacks. We discussed the news mostly seriously – not completely, because there always have to be jokes between us.
Last week, he called me the night before surgery to tell me he was ready and (for him, anyway) calm. Then he told me that his partner had a short list of people to call if the surgery “went bad”. I was on the list.
Well, I thought I’d been handling all his news pretty well until he said that. I struggled to not fall apart. “Are you upset?” he asked, surprised. “Of course I’m upset,” I snapped. After a few well-chosen words I can’t repeat here, I conceded that I’d be much more upset if I wasn’t on the list. We wound up laughing, speculating about how I would express that particular displeasure.
But before we hung up I told him something I hadn’t told him for almost 35 years: I love you. Now he was the one choking up.
The day after the surgery I got a text from him: everything was fine, but he’d have to go back. Well, to me that meant everything wasn’t fine.
Last night he called. He’s back home, sounding stronger than our last few conversations. I got all the gory details; there will indeed be more surgery in 6 months. Now he faces radical lifestyle changes, which he is more than happy to follow, especially given how much better he felt almost immediately.
We talked about many things, and joked as much as possible. This time when we hung up, he was the one to say “I love you”.
It was a close call: for him and for me. Over the years we’ve argued and screamed, performed on stage together, shared a grad school advisor, laughed and cried. Mostly I think of going out dancing with him, doing our Fred and Ginger routines even at the height of disco.
This morning I told another friend this story. “It’s never too late to tell someone you love them,” she said.
But as we all know, sometimes it is too late. Sometimes we’re too self-conscious. Sometimes we assume they know, so we don’t need to say it. Mostly we just feel like there’s plenty of time.
There isn’t. There’s never enough time.
Tomorrow is Valentine’s Day, a day for spending money to prove romantic love.
How about if you also make it a day to prove you love your friends? You don’t have to buy candy or send flowers. Just send an email, make a call or text.
Tell them you’re moved by the spirit of that chubby little cherub, and you wanted to let them know how much they mean to you. Yes, I know it’s hokey, and possibly a little pathetic. But do it anyway.
The worst thing that could happen is that you embarrass yourself. It wouldn’t be the first time, right?
The best thing that could happen is that there will be no doubt in your friend’s mind how important they are to you. Bonus: you won’t feel guilty later on for not telling your friend you loved them.
Posted by Friend Grief at 1:08 PM

Viki ,you always get to me,right where it counts the most..right to the heart of the matter. So let me tell you, new friend whom I feel I have known all along..I love ya,sister!!
Keep up your great work. It really matters:-)

I really debated about this post, Kathy. I guess I was a little more worked up than I thought! Love you, too!