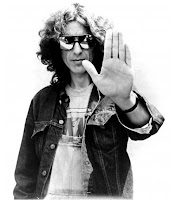 George Harrison's birthday was a few days ago. He would've been 69 years old. I find it almost impossible to think of that gangly, 20 year old "quiet Beatle" on Ed Sullivan's Show as a senior citizen.

Last fall, I wrote this about him, after watching the excellent "Living in the Material World" documentary about his life. As in "The Concert for George", his friends talk about their love for him. I highly recommend both films, whether you're a Beatlemaniac or not. Because you'll find yourself marveling at the beautiful, complicated friendships he treasured so much:

A few months ago, I blogged about Paul McCartney’s concert at Wrigley Field and how his tributes to John Lennon and George Harrison were so very different: while the song dedicated to John was full of regret and guilt, the one for George clearly showed the love they felt free to express to one another.

HBO has been showing Martin Scorcese’s documentary about George Harrison, “Living in the Material World”. His wife, Olivia, and son, Dhani, spoke fondly and honestly about George. But it was in the words of his friends that you really got a sense of the man: strengths and weaknesses, successes and failures.
One friend admitted that it was still difficult for him to talk about George, ten years after his death.
Another laughed about George being stubborn enough, even as he was dying, to buy a house in Switzerland to avoid the tax man (the subject of one of his best-known songs).
But it was Ringo’s emotional story of his last visit with him, at that house in Switzerland, that stuck with me. By then, George was too sick to get out of bed. Ringo had to leave: his own daughter was in Boston, diagnosed with a brain tumor, and he had to get to her. When he told his friend why he was leaving, George asked, “do you want me to go with you?”
They both knew it was impossible, but it was a measure of the man to want to support his friend, even as his own death approached.
As the almost 4-hour documentary shows, George wanted to leave the world a better place. Most would assume he would do that with music, and he certainly did. But for his friends, the music was almost incidental. It was the love he showed his friends that made their world a better place.
“Do you want me to go with you?”
Most would say, I suspect, that he goes with them every day. So it is with our friends, too. Friends die, but friendships don’t.


http://youtu.be/KZbGVHk3tBA
Learn more about “Living in the Material World” at George’s website.
Posted by Friend Grief at 10:41 AM