The Silly Things You Remember about Your Friends 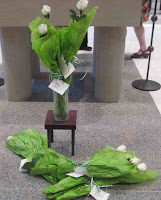 Last night I was working on something I’d promised to the Voices of September 11 people. That’s the organization compiling a digital archive for each victim of the 9/11 attacks. One of my high school classmates, Carol, died in the South Tower, and I’ve become the contact person for our class. I visited the Voices office in New Canaan, Connecticut, in May, to deliver some remembrances and discuss what else we would contribute. One of those things was my memory of attending an interfaith service at Holy Name Cathedral in Chicago a few days after the attacks:
As I waited, I called home for messages, and had one, from another classmate, Ann.
At that point, I had known her for 35 years. She is one of the least emotionally demonstrative people I know. But she was sobbing as she left her message. I didn’t recognize her voice at first because I don’t think I’d ever heard her cry. Carol, another of our classmates, worked in the South Tower, and she was missing. Her husband had gone to all of the hospitals, but couldn’t find her. She was last heard from calling home from her office on the 86th floor of the South Tower, just before the second plane hit. Please call school, Ann cried, and let them know.
The shock of 9/11 had been staggering, but now, it was worse: it was personal.
As my husband and I sat in the packed cathedral, my mind wandered, as if to block out the sniffling and cries from myself and those around us. Above the desperate prayers and soaring music, I swear I could hear Carol’s infectious, throaty laugh, which always seemed to be accompanied by a toss of her long, stubbornly curly hair.
And then my mind wandered to a contest we had in high school (or at least what passed as a contest at an all-girls Catholic high school in the 60’s): the Hairy Legs Contest. It was just as it sounds: who could go the longest without shaving their legs (if you didn’t have a boyfriend, a long time). I was ashamed of myself: could there have been a more inappropriate or disrespectful thought at that moment?
A month later, I was in St. Louis, having dinner with about two dozen classmates. We’d gathered to discuss ideas for a class gift in her memory, and honestly, to support each other. Among friends who would understand the reference, and possibly see some humor in it, I admitted my odd thoughts at the cathedral. One of them turned to me and said, “Don’t you remember? Carol won the contest.”
As you grieve for your friends, don’t be surprised when really odd thoughts pop into your head: memories of silly behavior or even things that initially make no sense (like mine). Don’t be too hard on yourself. They’re all memories of the friends who have made our lives so rich, memories to cherish.
Posted by Friend Grief at 8:48 AM

Viki,
What a great story and reminder fo how important it is to share our humanness when we deal with the loss of our dear friends. Like you said, it adds to the richness of the memory and I can't help but feel that somehow soothes the grief. This is a wonderful tribute to Carol and I'll bet she is laughing "up there" Thanks for sharing!
Kathy

So important to remember those who have gone on before us and to keep them alive to those who remain. Thank you for sharing and may God give you comfort during the anniversary.

I just love the idea of this blog. Writing as a way to grieve. My literary magazine is doing grief writing workshops right now, and they are so eye-opening.

Thanks for sharing your writing with the world, and your friendships.

Thank you all for your great comments! I debated about sharing this story because I still feel a little embarassed by it. But it's a good story that hopefully shows that not all memories are painful.

She-writer here. What a touching story. I think this blog can really resonate and touch a lot of people.

What an incredibly moving post this is! There are almost no words to describe what I'm feeling right now, except to say that you for your courage in sharing them here.

It's the little things we share with people that solidify our bonds; those unique moments that prove we shared a piece of our lives. For example, my wedding day doesn't even make my Top 10 list of moments with my husband; to me, that's almost a universal experience that everyone has. Not like when I set the bread basket on fire at our friend's wedding reception and he wanted to know how I got hot rolls; that's a scene that's special because it's ours. I'm glad you have your contest so that Carol can truly live in your memory :)