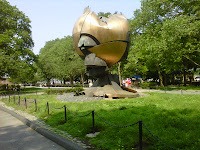 With a month to go before the 10th anniversary of the September 11 attacks, the media is gearing up for what promises to be saturation coverage.
Memorial events – some annual, some special for this year – are being announced in New York, Washington, DC, and Pennsylvania.
Politicians will invoke the attacks and the bravery of first responders, and try to link themselves to the courage shown on that day.
News specials – reruns of documentaries from those early days as well as new programs – are being announced for networks and cable channels.
President Obama has declared September 11 to be a National Day of Service, so communities around the country are not only planning commemorations, but activities to focus on positive action.
I remember after my Dad died, that I was dreading the first anniversary. “The first year is the hardest,” they say. Would I wake up the day after and suddenly feel great? Of course that didn’t happen. Every year on the anniversary, I think about him – not just that day, but the days leading up to it.
So it is now for those affected directly and indirectly by the events of September 11, 2001. Some people I know will mark the day by going to a religious service. Some will watch the specials on TV.  Some have made their peace, and feel no need to fixate on it.
Others would like to avoid it completely: “it’s ten years; get over it,” they say. I don’t think this kind of loss – indeed any kind of grief – is something you just “get over.”
Everyone grieves in their own way. And we’ll see some stark examples of those differences in the weeks to come.
Personally, I’ll be in New York, and I will blog every day from Sept. 9-14. I’ll report on the observances at Ground Zero, and other locations such as the Buddhist lantern ceremony at Pier 40 and the services at the British Gardens. I’ll attend two benefit performances of plays written in those early days after 9/11. And I’ll visit the new World Trade Center Memorial. It will all be from the perspective of grieving for a friend.
But I also plan to volunteer on September 10, a small attempt to give back, as I remember my classmate, Carol Demitz.
So, no matter how you feel about the upcoming anniversary – good, bad, indifferent – perhaps you could take some time that weekend to give back to your community, to your first responders, to the military whose sacrifices keep us safe.
That, after all, is the best way to remember.
Posted by Friend Grief at 4:56 PM

Hello Victoria, I'm here via the She Writes blog hop - though I have been here before, as you know.

Wishing you all the best as you blog from New York in September. Your plans to volunteer on September 10th sound like a good way to remember your friend.

Thanks, Helen. Carol and I were not close friends, by any definition. But her death transformed our class in many wonderful ways. It's the least I can do to show my gratitude for friendships that have begun, renewed and deepened. Congrats on the book launch today!