One More Thing about Paul McCartney and Friend Grief 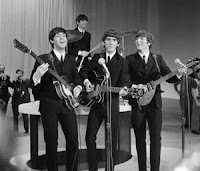 My posts this week, before and after seeing Paul McCartney’s concert at Wrigley Field, have inspired some great conversations.
Comments both here and offline have focused mostly on a new appreciation of friendships (not just Paul’s).
My friend, Gregory, mentioned that he and his late sister (my friend, Delle) had discussed the stark contrast between the emotions expressed so eloquently in Paul and John’s music and their inability to communicate their love to each other.
I suspect that’s not unusual for anyone who expresses themselves in an artistic way: visual artists, writers, songwriters. Actions directed to “the world” or 40,000 people in a stadium are easier than words directed across the table to only one person. The fear of rejection is much greater one-on-one.
When I talk here about grieving the death of a friend, I hope to convey that not only do we experience grief in a variety of ways, but we also experience friendship in many ways.
I did not grieve the same way for Delle that I grieved for Steve. I did not grieve the same way for Carol as I grieved for Corinne. Some of that was because of the circumstances of their deaths. But it was mostly about the differences in our friendships.
There is no one way to grieve and no one way to be a friend. You may be surprised, as you grieve, that you are responding in a completely different way than you did to previous losses. Sometimes it makes no rational sense to grieve more for one person than another. But grieving is an emotional response that needs to be respected as such.
But one thing is sadly universal: the tendency to put off telling our friends what they mean to us. Look at the difference between Paul’s rendition of “Here Today” and his performance of “Something”: night and day, joy and pain.
Which song do you want to sing about your friends?
Posted by Friend Grief at 9:07 AM

Viki,
This fits right into "the melody of friendship" I wrote about my friend Judy. You are so right that we do grieve each one differently. I am so glad you are highlighting this as when we are going through the loss, we often times do not understand our own feelings or reactions. Great post!

Thanks, Kathy! I would've taken notes at the concert if it hadn't been so dark!

Vicki, I enjoyed reading your post. I have been blessed that I haven't had any really close friends die (yet) but the song that immediately comes to mind for my friend in Dallas is, "Thank you for being a friend." We've gone through so much together in more than 40 years and we've stayed friends despite travelling in different directions. Thanks so much for sharing with the Boomer Diva Nation Community!

I know what you mean. One of the reasons I'm a writer is because it's the only way I'm able to really communicate with people. I can't express myself well in talking, but I can write what I mean.

Thank you all for your kind comments. I've gotten great feedback on these posts. Maybe I should write about Paul more often! ;)