A 2012 Plan for Grieving Your Friends

New Year
Clean Slate
Clear the Decks
If only…
I’m not suggesting ignoring your grief.
I’m not suggesting pretending you didn’t lose a friend.
What I am suggesting is finding a way to channel that grief, finding a way to create something new and positive.
One of the feelings most often felt when a friend dies is that we want to be sure they’re not forgotten.
So maybe we visit the cemetery, or post on their memorial Facebook page.
But how about taking that a step further? How about actively doing something to remember them?
Carol Demitz was a classmate of mine. We didn’t travel in the same circles, but we had classes together in our small Catholic girls high school in St. Louis.
After she died on 9/11, our class made a donation to our school in her name, underwriting new lighting in the hallways. 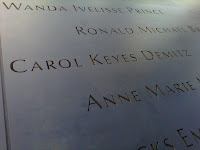 But every year on the anniversary, when the names of the victims were read at the Ground Zero ceremony, her name was mispronounced (the accent’s on the first syllable, short vowels). I’m a stickler on pronouncing names correctly and it bothered me. When I stood there on the 9th anniversary, and heard it mispronounced yet again, I made a promise to myself that it wouldn’t happen the following year.
Last May I started in earnest to find out how to correct that. I spoke to several people, finally talking to a woman in Mayor Bloomberg’s office just after Labor Day. She wrote down Carol’s last name phonetically, but could make no promises that the person reading would get it right. I figured at least I’d gone on record, and maybe that was the best I could do.
So on the morning of the 10th anniversary, standing in the warm sun across from Zuccoti Park, I listened to the names being read again. This time Carol’s name was pronounced correctly, and I nearly burst out laughing. Then I wanted to cry.
It wasn’t something that was important to most people. Even other girls from my class said “we know what’s right; that’s all that matters”. But for some stupid reason, it was as important to me as collecting remembrances for the digital archive. She would be remembered. And named correctly.
We’re going to consider a few ideas in the coming weeks, looking at ways people found to keep their friend’s memory alive.
Some are activities, some are financial, and some are life-changing decisions.
You might have your own ideas, or these posts may trigger your imagination.
And if you’ve done something - big or small, temporary or permanent - to preserve the memory of the friend who meant so much to you, feel free to share it.
Posted by Friend Grief at 10:03 AM

Victoria, my dear, this story just touches my heart. How lovely of you to care enough about your friend to make sure (to the extent that you could) that her name was pronounced correctly during that memorial service. We all should be blessed with friends as loyal and true as you are.

It was all so weird: Carol and I weren't friends, just classmates. But I got a tad obsessed about it all. I just thought she deserved to be remembered correctly. Luckily, it worked out.

Viki, This really touched a chord! During my wedding mass 10 years ago, I wanted to verbally recognize my deceased loved family & friends. When my brother read the names in the Prayer of the Faithful, he mispronounced my best friend,Judy's last name. I cringed. It really bothered me. So I can relate to how you felt and I commend you for all your efforts to correct it. Often times the littlest things that make the biggest difference.

Oh, how I agree with you. I'm watching the reading of the names right now and it grates my nerves when a name is obviously mispronounced. I don't know these folks but they deserve respect and their loves one deserve to hear the PROPER and CORRECT name. Do the readers just get the list right before the ceremony?

As I said, they wrote down her name phonetically. But the people who read are family members - and very emotional. One of the names they're going to read will be the family member who died. So you can forgive them for not paying proper attention to the names of strangers. But yes, they all deserve respect.