The Myth of Closure - Part 3 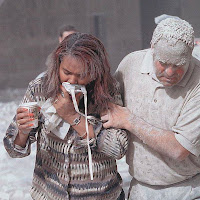 It's been quite a week, hasn't it?
I’ve been talking to a lot of people this week about closure, as it applies – or doesn’t – to the death of Osama bin Laden.
The word has been bandied about in newspapers, blogs, Facebook, Twitter and every news program on TV.
My “research” has gleaned the following observations:
1.      Closure does not end grief.
2.      Justice does not ultimately equal closure.
3.      Those who speak most emphatically about closure tend to be observers to the situation, rather than directly affected.
4.      Those who are most directly affected by 9/11 don’t all see bin Laden’s death as closure.
5.      Believing there is closure makes people feel better, because they think they will no longer have to witness grief.
6.      Closure doesn’t change anything.
Wouldn’t it be great if the last observation were true?
Wouldn’t it be great if closure meant we are no longer in pain, grieving the death of a loved one?
Wouldn’t it be great if closure meant that the person we mourn comes back to life?
While it’s certainly a good thing that the world has one less personification of evil, it doesn’t, as a friend said this morning, “change anything.”
We will grieve; we still miss the person who has died. And while our grief will soften and evolve, it will never completely go away.
That’s not necessarily a bad thing.
Because as long as we have our memories, that person still “lives” in our hearts and in our minds.
For me, getting to the point where you can think about that person, and smile instead of cry…that’s closure.
Posted by Friend Grief at 12:40 PM

I'm totally in agreement about your definition of closure. My heart goes out to each and every one of those who lost somebody in 9/11. May peace, in whatever form it can, be with you in the coming weeks and months, and always.

Yes, I think closure probably does mean different things to different people, most of us would just like to see closure for those who have agonised and suffered so very much.

I don't like this word. Closure. What does it mean? I never closed anything. One day, it became less painful. But I remain sad.

I was surprised about how impassioned people are about the word "closure". Most of the people who said we now "have" it were people on the periphery. Those most affected tended to believe the word was overused and not accurate.