The Story of a Pink Cloud – Guest Blogger Rebecca Bricker

My friendship with Rebecca Bricker is like many of those in the 21st century: online. We met four years ago (time flies when you’re having fun). We’ve never met in real life, though she may meet my daughter soon.

The story of how she wound up living in Tuscany is both funny and compelling. No, she’s not the author of Under the Tuscan Sun, but her Tales from Tavanti is every bit as entertaining.

If you’re like me, certain things will trigger the memory of a friend who died. For example, whenever I see a steel-grey PT Cruiser, I assume it’s Delle behind the wheel. Rebecca Bricker has a very deliberate ritual to ensure that she’ll remember.

My thanks to Rebecca for sharing the blog post she wrote last month about her friend, also named Rebecca, and how she remembers her. This is an edited version:

When I hear the news that someone dear to me has died, I go outside and look at the sky. I memorize the way it looks and each time I see a sky that’s similar, I pause to remember that person and send up a big hello…

I had a close friend named Rebecca. We had been Cub Scout den mothers and active volunteers at the school our young sons attended. When I met her, she was recovering from breast cancer and for the next couple of years appeared to be in remission. But then one day she said to me, “I went to the doctor last week – the cancer is back.”

She had 30 tumors in her liver. Her doctor put her in a clinical trial for a new cancer drug that seemed to have a miracle effect. Within a few months, the tumors were gone. When she got the news, we were sitting at my dining room table finishing a quilt for her sister for Christmas. She and I danced around the table.

And then she did something surprising to me. She essentially threw away the list she had made of the things she wanted to do before she died – like making that quilt for her sister (which we did wind up finishing).

“I’ve been given the chance to live my life again,” Rebecca told me. She wasn’t dying anymore. She was alive.

A talented artist, Rebecca began giving art lessons to young people in her home studio. She camped out on her roof one night to watch a meteor shower. I slept through it, but she told me all about it the next day. She was living her life each day with joy and zeal.

The drug’s cancer-quelling effect lasted almost two years. Rebecca knew, as the results came in from other women who had started the trial before her, that her cancer would likely return. And it did, with a vengeance. 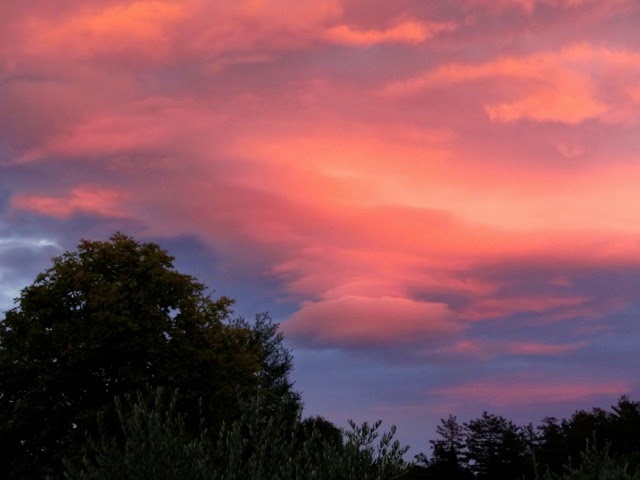 On the night she died, just a few months later, her husband called me to tell me she was gone. I walked outside and looked up at the sky. The moon was bright, with Mars twinkling just above it. A billowing pink cloud slowly filled the sky. The air was still, not a breath of a breeze from where I stood. But as that pink cloud swirled around the moon and Mars, blown by a wind I couldn’t feel, I knew she was there. I envisioned her at heaven’s special-effects board playing with the buttons.

A few weeks before Rebecca died, she said to me, “I’m not leaving you for good, you know. I’ll be back to visit you, I promise.” These conversations always took my breath away. I couldn’t bear to think of life without her sunny face, her mirthful laugh, her joie de vivre.

The summer after her death, I took myself to France to celebrate my 50th birthday. I felt Rebecca’s presence on that trip. She sat next to me at the Basilica of Sacre Coeur in Paris and wandered with me through villages in Provence. As I stood knee-deep in lavender one day, she assured me this was as close to heaven as any place I could find on earth.

On the flight back from that trip I awoke from a nap and lifted the window shade. Next to the wing was a big puffy pink cloud.,

“There you are,” I whispered.

A few days after I got home, I had dinner with a friend, who had known Rebecca well. My friend said to me, “I had the strangest dream last night about Rebecca. She came to me, asking me to massage her feet. Isn’t that odd? She said her feet were so tired.”

I smiled. “That’s because she’s been with me.”

In my travels, Rebecca is with me often. She always wanted to experience the places I’ve been so fortunate to visit. Every time I see a pink cloud hovering, I smile at her and say, “Isn’t this amazing?”

Her book, Tales from Tavanti: An American Woman’s Mid-Life Adventure in Italy, can be ordered here
Posted by Friend Grief at 8:00 AM

Oh Rebecca, what a beautiful tribute to your dear friend. What a lovely image to remember her by. Thanks for sharing.

Thank you, Pat. It's so comforting to feel her presence after all these years.

Hi Victoria! I'm stopping by from She Writes. :)

So many of my truest friendships have been developed online. That's one of the great things about the internet.

Rebecca, I'm interested in reading about your story about living in Tuscany. It sounds like something I'd enjoy because it could transplant me to somewhere I've never been. :)

Your post was touching. A lovely tribute for your friend. Thanks for sharing it with us.

Chrys, thanks so much for your comments. I love sharing my memories of Rebecca - she continues to be such an inspiration to me.

Thanks for your comments, Chrys and Pat.

I think Rebecca's post really struck a nerve because she's doing something very deliberate. Most of us leave those memories to chance, but she created a way to consciously remember her loved ones.