Mars and Venus Grieve Their Friends 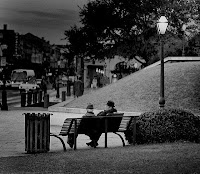 Many books have been written about the differences between men and women, especially regarding relationships. Mostly, they focus on romantic relationships. Some consider friendships: girlfriends and “the guys”.
If you asked a group of people if men grieve differently, I’m guessing most would say yes. They’d insist that men work through their grief by doing things: keeping up with familiar routines or running errands for the family of their friend who died.
They may insist just as strongly that women talk through their feelings. Men are assumed to not want to verbalize their grief, much less share it.
Well, that described my opinion. When I started interviewing people for my book, I approached the men with pre-conceived notions about how they’d respond. I thought asking them to talk about a friend who died would be akin to pulling teeth. I would be lucky to get a few coherent sentences.
I don’t think I’ve ever been so wrong in my life.
“All my friends are dead,” one lamented recently. It’s not true, but at his age (87) he’s outlived most of them.
Then, without prompting, his next comment was, “I wouldn’t be where I am today without them.”
For almost 3 hours, he talked about the people he met at different moments, people who affected the trajectory of his life:
The woman who invited him to Paris…
The man who sponsored him to come to the U.S…
The man who offered him a job that changed his career…
They’re gone now, and he speaks fondly of their friendships. He gives them full credit for the successes he’s had – both personal and professional. And he misses them.
He’s not the only man who’s talked for hours about friends he’s lost. My first interview with a man lasted almost 2 hours. Once he started talking about his best friend, he didn’t want to stop. He wanted to tell the stories, wanted to make sense of what had happened and why he still grieved so deeply.
Women may very well be more willing to talk about their feelings. But women are expected to talk about their feelings. So it’s not a surprise that they open up about grieving their friends.
Men are quite capable of talking about their friends, their memories, and their grief. But in many situations, men – rather than women – are judged by how they react. Men are assumed to be stoic, in control, able to “handle” messy things like grief.
The truth is most men aren’t given a safe, non-judgmental place to share their memories and sadness. They may be protecting their image; they may feel the need to be stronger than anyone around them.
But without realizing it, I’ve given some of them a place to vent: to be angry that their friend died, to be sad they died, to wonder what it all means to them now.
I’m not there to make a diagnosis or prescribe anti-depressants. I’m just there to listen. So, while I still try to finish my first book, there will be a second one: just about men grieving their friends.
This takes no special talent or skill. You can do it too.
If you know a man who’s lost a friend recently, get together with him. Go have coffee or a beer. Just hang out.
Tell him you’re sorry their friend died. And ask him to tell you something about that friend.
Just don’t be surprised if you’re listening for a long time.
Posted by Friend Grief at 1:23 PM

Thanks so much for this blog post. A writer friend mine,Jill Kemerer, who (Along with Porter Anderson), went to some lengths to help me find your blog with this post, and I just want to thank you for not only admitting your preconceived notions about what men in general will and will not share.

There are women who can be averse to getting too personal in public, or even in private, with close friends and relatives, they need some level of fencing between what they will say or not in terms of personal struggles.

I'm male, and I'm as opposite the "Close-mouthed guy who never shows emotion/vulnerability in public" that you can get. Sometimes I wish I wasn't always so emotionally transparent, only because it can make me look horridly bratty, and I don't see myself that way, besides if I truly was like that, I wouldn't be posting here now.

For me, few things get my dander up like gender stereotyping, to me, this is as offensive and narrow-minded a practice as book banning and censorship, ESPECIALLY in Children's/YA books. (I'm primarily a writer of Children's books, hence why I emphasize it)

I'd also be one of those guys who will "talk your ear off" but I don't mean that in an egocentric way, which is something neither men nor women like to tolerate for long.

I'm shy in person. But I love the internet because I don't have to look directly at someone, and while sometimes a lack of facial expressions, tones of voice, and body language can cause confusion in what someone means to convey, for me the lack of looking visually right at those I converse with allows me to open up easier, and my talking like a clichéd auctioneer/chipmunk doesn't matter in text-based conversation.

"If you asked a group of people if men grieve differently, I’m guessing most would say yes. They’d insist that men work through their grief by doing things: keeping up with familiar routines or running errands for the family of their friend who died."

I couldn't help but chuckle to myself here (Because this is SO opposite me!)

Even as a child, I GRIEVE over things I've lost, not many relatives I knew have died yet, but I've lost friends (They're not dead, we just grew apart), etc.

It doesn't help that the few male relatives in my immediate family are more the stoic, tight-lipped types of men (The "Real" Men that are stereotyped I think even more unjustly in some respect now than women at the height of the Women's Lib movement, in some respects) often felt off-put by me, and I them.

Since they're not talkers and while I respect their "typical male quirks and views", they do alienate me from them emotionally, because I can only keep so much inside before I become overly self-critical myself.

My family will tell you the whole "Solider on in stark silence" thing is NOT my trademark (Though I think they sometimes wish it was...) I tend to wear my heart on my sleeve, especially in areas I'm passionate and serious about, such as writing.

Thanks for being big enough to admit your prejudiced views and more importantly see on a new level they weren't (entirely) true.